A day in Baku.

A quick whizz around the old city. Really interesting place.

Excavations of the old city.

Excavations of the old city.

Looking from the old to the new city, with the Flame Towers in the background.

Decorative stone arch entrance to a building. A similar design can be found on the window frames of the Mohammed Mosque.

View of one of the three Flame Towers from the old city.

Old man sitting at the side of the street by a narrow pedestrian thoroughfare watching the world go by.

Modern detailed stone balustrade and balcony in the old city.

Traditional wooden doored entrance to building in the old city, with a modernish door bell.

Cat on a wall.

Sections of a stone facia probably for above a stone entrance or stone gate, lying against the wall in the street.

Greenery of a tree in an area which is predominantly surrounded by stone buildings.

View from a flat roof in the old city with the minaret and dome of the Shirvanshahs Palace Mosque to the left, with the geyser in Baku bay and Caspian Sea in the background.

One of the entrances to the Palace of the Shirvanshahs.

Oops. A bit out of focus.

Entrance to the Shah Mosque inside Palace of the Shirvanshahs.

View across the old city towards the new, with Baku TV tower and one of the Flame Towers rising dominating the skyline in the distance.

Sight of a Flame Tower through the trees.

A Flame Tower in the background of the business district.

Side of a religious building.

Metal gates on an arch entrance in a wall in the old city.

Entrance arch in a wall in the old city.

Modern art in the old city.

Stone corner piece, in the shape of a helmet, at the end of metal trellis  on a low stone wall.

Mascots for the IV Islamic Solidarity Games held in Baku in 2017. The mascots represent the Karabakh horse, and their names are Inje (l) and Dzhasur (r).

Ancient catapult installed on the fortress wall of the old city.

Various fauna in the old city.

Ancient cannon installed on the fortress wall of the old city.

Touch of paint and some physical accessories to create the art piece. 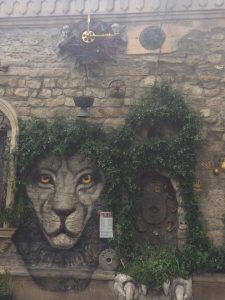 “Paint of Brush” (my description) sculpture.

Sabir Bagi Park with the old fortress wall on the right.

Looking through the park at the decorative paving towards fountain in Sabir Bagi Park.

Different design of decorative paving looking towards the fountain in Sabir Bagi Park.

Facade of the Nizami Museum of Azerbaijan Literature.